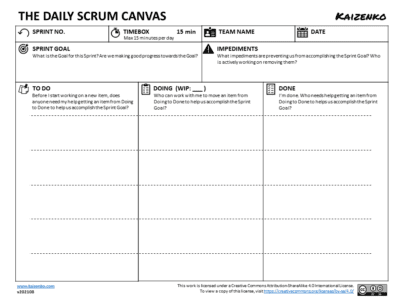 Developers start the Daily Scrum by reviewing the Sprint Goal and assessing how much progress they are making towards the goal.

Next, Developers identify any impediments that are preventing them from accomplishing the Sprint goal. It’s important that these are made visible and that someone is actively working on removing the impediment.

Developers that just finished an item start by updating the team about it and then offering to help anyone needing support in getting an item still in progress wrapped up. If no one needs help, then the Developers can select a task from the to-do list and start working on it.

Developers working on items that are in progress go next. Everyone is encouraged to ask for help to get an item done as soon as possible. New tasks might get added or removed from the Sprint Backlog as more is discovered. If an item turns out to be a lot more complicated than initially thought and discussed in Sprint Planning, then Developers inform the Product Owner and consider pulling that item out of the Sprint and sending it back to the Product Backlog for further refinement and re-consideration for a future Sprint.

Developers that are free volunteer to help anyone needing support in getting an item still in progress wrapped up. If no one needs help, Developers pick up a new task from the To-Do list and start working on it.

WIP is Work In Progress. It is a good idea to have a Work In Progress Limit to ensure Developers focus on finishing or getting to done vs. starting new work. The WIP limit limits the number of items that can be in progress at any one time (in the Doing column). This means when the WIP limit is reached, no Developer can start working on a new item and instead must help existing Developers finish in-progress items. A WIP limit that is less than the number of Developers promotes teamwork, collaboration, knowledge sharing, and avoids silos.

The Daily Scrum ends with an updated Sprint Backlog and a plan for the day to help the Developers get closer to accomplishing the Sprint Goal.

Tales of the Bizarro Scrum – The Sprint was a Colossal Failure

When Can I Take the Certified ScrumMaster (CSM) Exam?