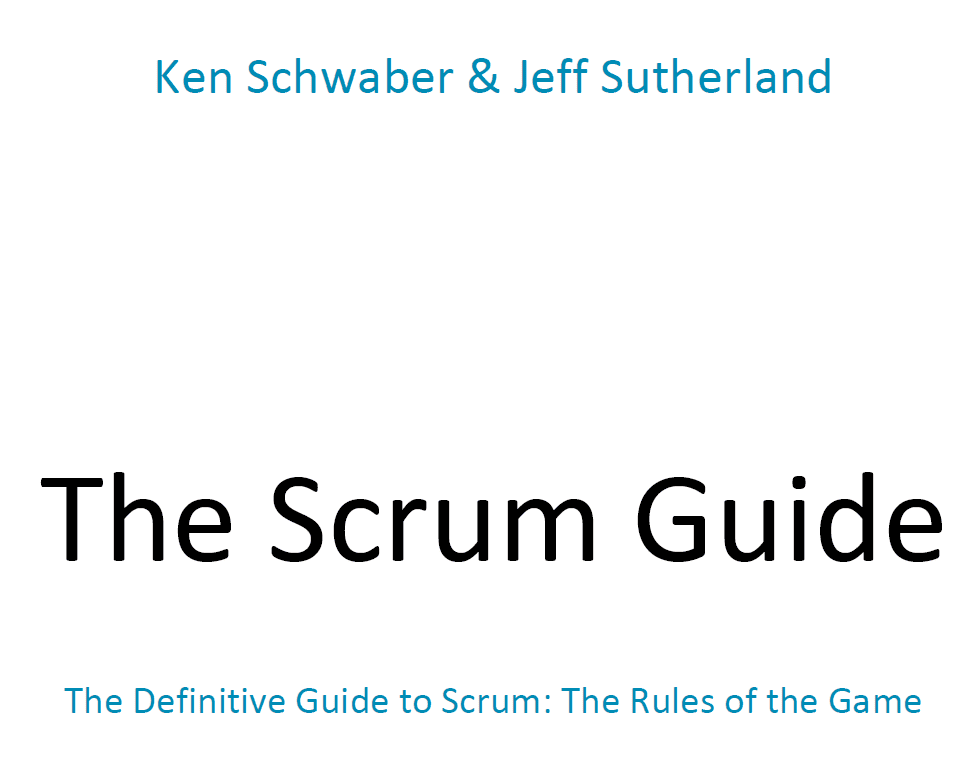 It is updated and maintained at scrumguides.org by the co-creators of Scrum, Jeff Sutherland and Ken Schwaber. Below are the previous Scrum Guides from 2010 through today, along with a history of the changes to the Scrum Guides. Also listed below are publications from 1986 to 2010 on how Scrum evolved over the years prior to the publication of the 1st Scrum Guide.

The 2020 Scrum Guide was updated to be even less prescriptive, highlight the focus on one team and one product, introduce the product goal, add a home for the product goal, sprint goal and definition of done, change self-organizing to self-managing, make Sprint planning about 3 topics by adding a Sprint Goal as topic 1, and remove non-IT language. For a deeper dive on the changes, check out this blog.

The 2016 Scrum Guide was updated to add the Scrum Values and highlight that successful use of Scrum depends on people becoming more proficient in living these five values.

The 2013 Scrum Guide was updated to highlight the importance of artifact transparency, combine Sprint planning into just one event with two topics, change grooming to refinement, clarify the Sprint as a fixed length container event that includes the time boxed other events, highlight that the Daily Scrum is a planning event, and emphasize that the Sprint Review is about determining the next most valuable thing to work on.

The 2011 Scrum Guide was updated to change development team commitments to forecasts, highlight that burndown charts are not required and not the only way to track remaining work and progress toward completing work, clarify that release planning is useful but not required, remove Sprint Backlog Items and instead refer to the Sprint Backlog as the team’s plan for delivering the work, change prioritized product backlog to ordered, add product backlog refinement, remove prescriptive practices and techniques, refer to all development team members as developers, remove reference to chicken and pigs, and remove reference to undone work.

The 2010 Scrum Guide was published by Ken Schwaber and Jeff Sutherland to help people better understand Scrum. The Scrum Guide contains the definition of Scrum along with the elements of the framework including roles, events, artifacts, and the rules that bind them together.

In 2004, Ken Schwaber published a follow-up book on Scrum, Agile Project Management With Scrum. Appendix A listed the rules of Scrum and that is probably the first draft of the Scrum Guide.

In 2001, Ken Schwaber and Mike Beedle wrote the 1st book about Scrum entitled Agile Software Development with Scrum. This became the default guide to Scrum along with various Scrum practices.

In 1998, Mike Beedle and Martine Devos led the work on the 2nd paper on Scrum entitled “SCRUM: An extension pattern language for
hyperproductive software development.”

The patterns of the SCRUM development method are presented as an extension pattern language to the existing organizational pattern languages. In the last few years, the SCRUM development method has rapidly gained recognition as an effective tool to hyper-productive software development.
However, when SCRUM patterns are combined with other existing organizational patterns, they lead to highly adaptive, yet well-structured software development organizations. Also, decomposing SCRUM into patterns can guide adoption of only those parts of SCRUM that are applicable
to a specific situation.

In 1995, at the Object-Oriented Programming, Systems, Languages, & Applications conference, Ken Schwaber and Jeff Sutherland presented on the Scrum Development Process at the Business Object Design and Implementation Workshop. The presentations was based on Ken’s work at his company Advanced Development Methods and Jeff’s work at Easel Corporation and inspired by the New New Product Development Game article. Ken and Jeff integrated their ideas into a single framework and referred to it as Scrum. A paper based on the presentation was published in 1997.

The origins of Scrum and the Scrum Guide trace back to a 1986 Harvard Business Review article by Takeuchi and Nonaka entitled “The New New Product Development Game”. This paper described a new all at once approach to product development based on research from companies like Honda, Canon, and Fuji-Xerox . It emphasized empowered teams, self-organization, cross functionality, and continues learning and improvement among other concepts. It also provided a rugby metaphor and introduced the word Scrum.

In today’s fast-paced, fiercely competitive world of commercial new product development, speed and flexibility are essential. Companies are increasingly realizing that the old, sequential approach to developing new products simply won’t get the job done. Instead, companies in Japan and the United States are using a holistic method—as in rugby, the ball gets passed within the team as it moves as a unit up the field. This holistic approach has six characteristics: built-in instability, self-organizing project teams, overlapping development phases, “multilearning,” subtle control, and organizational transfer of learning. The six pieces fit together like a jigsaw puzzle, forming a fast and flexible process for new product development. Just as important, the new approach can act as a change agent: it is a vehicle for introducing creative, market-driven ideas and processes into an old, rigid organization.