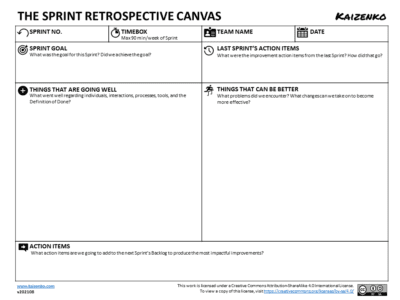 The Scrum Guide defines the Sprint Retrospective as an event to plan ways to increase quality and effectiveness…The Scrum Team inspects how the last Sprint went with regards to individuals, interactions, processes, tools, and their Definition of Done… The Scrum Team discusses what went well during the Sprint, what problems it encountered, and how those problems were (or were not) solved…The Scrum Team identifies the most helpful changes to improve its effectiveness. The most impactful improvements are addressed as soon as possible. They may even be added to the Sprint Backlog for the next Sprint.

The Sprint Retrospective is a key event that drives continuous improvement. The Sprint ends with the Sprint Retrospective where the Scrum Team inspects and adapts their processes. The Scrum Team gathers data based on what happened in the Sprint as it relates to team dynamics, availability, capacity, schedule, impediments, tools, quality of the Product Increment, etc. Then the team analyzes to see if there are any common patterns. Next, the Scrum team narrows down the list of improvements and discusses the most pressing needs. Finally, the team decides on what process improvement action items to take on in the next Sprint.

Next, The Scrum Team considers the action items the team took on for the Sprint and assesses whether they were addressed or not. It is vital for the team to regularly reflect on what they said they were going to do and follow-up on that. It’s important to see progress, and if not, then address why not? Are the unfinished action items from last time still relevant? The Scrum Team needs to assess that relative to the new items that come up.

Things that Are Going Well

Individual team members gather their thoughts on things that went well. Silent writing works great here as it allows all team members to be heard. Team members silently write down one thought per post-it and then place their post-its in the going well column. The team reviews that data to see if there are common patterns or themes. The team then celebrates their improvements.

Things That Can Be Better

Next, Individual team members gather their thoughts on on things that can be improved. Again, silent writing with one thought per post-it. The team reviews that data to see if there are common patterns or themes. The team then decides what items are the most pressing and will have the biggest impact on team effectiveness. The team might do dot voting to narrow down the list.

Finally, the Scrum Team tasks out the work they need to do on the action items that will produce the most impactful improvements.

The Sprint Retrospective ends with the Scrum Team making a commitment to each other to work on the improvement action items. The next Sprint’s Backlog is updated with these items.

Tales of the Bizarro Scrum – Of Course We Are Agile!