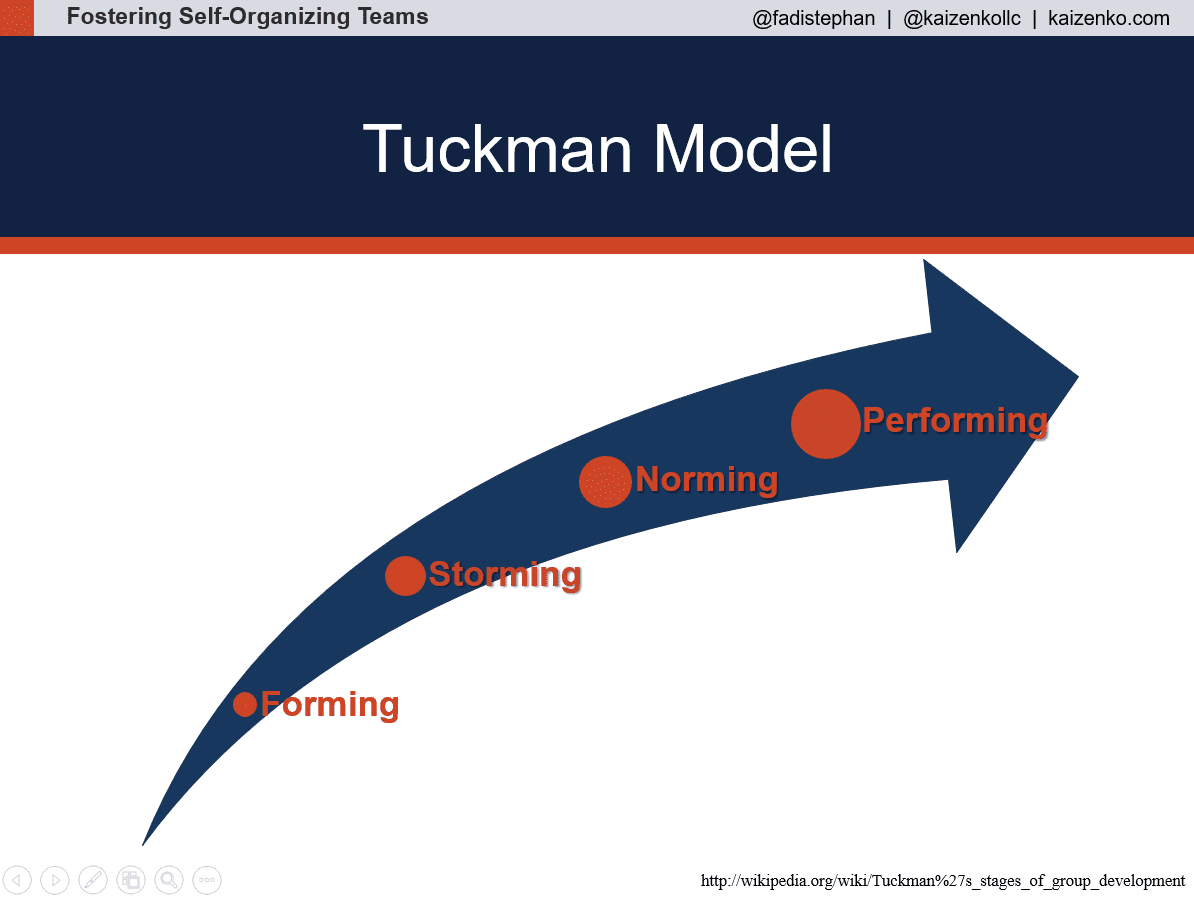 Now that we’ve looked at individual development, let’s look at team development. The most known model is Bruce Tuckman’s stages of group development from forming, norming, storming and performing. A team goes through these stages as they transition from coordinating to cooperating to collaborating to hyper performing. These phases are all necessary and inevitable in order for a team to grow and mature to a level capable and ready to face up to challenges, tackle impediments, brainstorm solutions, plan out their own work, and regularly deliver on their goals.

Forming – The team is still new or new members have just joined or left the team. It’s more like a group of individuals still trying to get to know each other and learn more about the work ahead. The focus is on tackling tasks and working independently. The group may be motivated but it’s more individualistic motivation as the group is usually relatively uninformed of the larger vision/goal. Team members are usually on their best behavior but very focused on themselves.

Storming – Now that the group has been together for a while, personality clashes start to appear. Members become more opinionated. There is tension and disagreements. Members are wary of dominating personalities or diminishing responsibilities, and question leadership decisions. Differences and disagreements must be resolved before the team can progress out of this stage. The duration, intensity and destructiveness of the “storms” varies from team to team. Conflict and disagreements provide different perspectives can makes the team stronger, more versatile, and effective. Tolerance of each team member and their differences should be emphasized. Leaders have a key role in guiding the team through this phase. They need to be more available or more directive in their guidance until the team members learn how to resolve their differences and how to work together more comfortably.

Norming – At this stage, the team has learned to tolerate each other, are open to new and different ideas, accept each other, respect what each person brings to the table, and are focused on collectively achieving the overall common goal. Individual and personal differences generally give way to that overarching bigger picture. Leaders here have to ensure that the team does not get too comfortable with each other and completely avoid conflict as that might lead to tunnel vision, and a lack of creativity and innovation.

Performing – This is the stage we want the team to get to as quickly as possible and have them stay at for as long as possible. At this stage, the team is diverse with varied personalties and skills, respectful of each other and their contributions, open to new ideas, courageous to raise impediments and overcome them, focused on achieving the main goal, and committed to each others success. They are motivated, knowledgeable, competent, and self-organizing requiring little supervision. Dissent is expected and allowed as long as it is channeled through means acceptable to the team and decision making it handled as close to the team as possible with leadership being more on the informed side than actively participating.

It is important to note that any change to team composition or to leadership will result in the team cycling through these stages as they adjust to their new dynamic and norms.

7 Attributes of a Self-Organizing Team

Delegation Board for Fostering a Self-Organizing Team